Baan Sangdamrong,
an Asian-style house that brought family members together and be at one with nature.

Simple living with family and nature is the retirement life that anyone could dream of, including the Saeng Damrong family, where the main residents are a retired couple and three middle-aged sons.

When the house’s living space became inadequate, the new renovation of Baan Sangdamrong began with the desire for each member of the family to have their private corner while still having a common family space. It is a simple, intimate home that is at one with nature in the style of Eco Architect.

With three sons, this house would need to be able to accommodate the expansion of families in the future. Privacy is also an additional challenge, as well as modifying the space from the original house to better suit future use. For example, moving the parents’ bedroom downstairs to accommodate more convenient movement and expanding from one to two bedrooms since elderly people sleep deeper in separate beds, as well as designating the children’s bedrooms separately for mutual privacy.

Originally, the land of ​​the house was about 300 square meters and was designed in an L shape facing north, which is the direction that the wind can flow through. However, it was blocked by the building. Also, there were parking lots on the stilt floor, which were relatively distant from the front entrance, squandering most of the main usable area to the driveways. The residents only saw the driveways surrounding the house. This became the first main issue that the architect addressed and re-layout the original house plan to solve the problem. The parking areas were relocated to the front, adjacent to the main road. The service area and the housekeeper’s room are placed next to the parking area.

Following that, the architect converted a portion of the L shape on the right into an open green courtyard, allowing air circulation while adding usable space to the left. After renovations, the house turned its back on the street, which satisfied the residents concerned over privacy.

“The house spatial planning is based on flow-influenced thinking, which is usually divided into sections. The first one is the public section including the parking, the entrance hall, and the reception area. Next is a semi-public zone that allows guest access. Before moving to the Private zone, where family members watch movies or work. The zone serves as a family common space. Last are each member’s bedrooms that were designed with a private garden view and were located on different wings of the house to provide privacy for everyone.

Get close and be at one with nature

Since the house is located at the junction of an alley on the south and the main road on the west, the front area in the southwestern part near the parking area, which is oriented in a wind direction, has been transformed into a large green mass to help filter out both noise and dust from the street to entering the house. The house is surrounded by this green landscape from the front gate to the Organic Farm in the back. It not only keeps dust at bay but also gives a garden view for all functions in the house.

The Organic Farm is located towards the back of the property. The homeowner cultivates vegetables and breeds earthworms and chickens. Fortunately, because the farm is either windward or leeward, no odours or dust get into the house.

Another important challenge is that the owners want the house to be able to live comfortably without the need for air conditioning. The layout design is therefore in a Single Function format to allow airflow to reach every space without overlapping functions.

As for the swimming pool, which was originally on the south rear of the house. The original problem encountered was the reflection and evaporation of moisture, causing the house to accumulate humidity. The new swimming pool is therefore designed to be in the leeward direction in the northeast area, connecting to the outdoor garden area at the back.

Simplicity and tranquillity in a Thai house with an Asian touch.

The house’s appearance stems from the owner’s fondness for Asian-style homes. The architect combined the warmth-enhancing architectural language with the simplicity and tranquillity of the Asian-style ambience. It can be seen through the simple voids, the appropriately sized windows that resemble the Asian homes we are familiar with, or the materials selections that come with a modest Vernacular vibe with the design of this half-mortar and half-timber house but are interpreted into a serene and simple Asian style.

The rock garden adjacent to the swimming pool is likewise designed with an Asian-style concept. To enhance the outside ambience of the house to look calm and peaceful, the main decoration is made of stone. This garden also connects the view into the Buddhist Praying room which features a circular void through which the owners can occasionally glimpse this tranquil garden for meditation.

The design of this house is a matter of choosing to adjust and make some changes to satisfy changing demands and surrounding circumstances, such as the occupants’ age, preferences, or lifestyle. According to Kaew-Khamron Sutthi, the Architect and Founder of Eco Architect Office, the most significant aspect of renovating a house is addressing the right problems and removing some portions of the building which might deliver great gains of being more responsive to living needs. The design that is fit the bill will allow homeowners to enjoy life in a setting ideally planned by a designer, just like Baan Sangdamrong, this old house that has been revitalized. 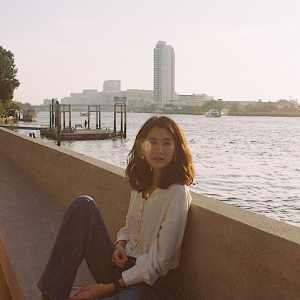